During these months in the Christian Calendar we celebrate:
2 February: The Presentation of Christ in the Temple (Candlemas)
19 March: Joseph of Nazareth
25 March: The Annunciation of Our Lord to the Blessed Virgin Mary 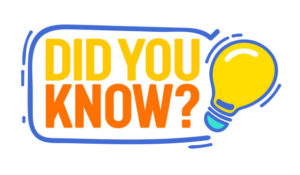 Did you know that you can print this Magazine?
If you could like to print this Magazine for yourself or perhaps someone who can’t access the internet then you can! Simply click the green Print & PDF button at the top right of every post and follow the instructions. Don’t forget if you are sharing paper with someone do it safely and hygienically.

I write this as we celebrate Candlemas. This often overlooked feast brings to a close the season of Epiphany and at church, it means the laying away of the Nativity Scene until later this year.

I couldn’t help but reflect this year, as I put away the Nativity figures, about all that had happened since I did it in 2019. Whilst Coronavirus was on our TV screens at Candlemas last year, none of us could have foreseen the devastation this pandemic would bring to our country and the world. The recent tragic milestone of 100,000 Covid-19 related deaths in the UK is a stark reminder of how this pandemic has impacted the lives of so many people. The figure is truly shocking and devastating. The Archbishops of Canterbury and York reflected on this and encouraged the nation to pray each day during February – you can read it here and perhaps join with them. I hold in my prayers all those who I’ve taken funerals for this past 10 months, who have not been able to hold the funeral they would have done for their loved ones, who have lost loved ones due to Covid-19, directly or as a consequence of it.

Candlemas is the moment that Mary and Joseph, proud parents, take their baby son into the temple where Simeon and Anna recognise Jesus for who he is, the long-awaited Messiah, the Son of God. Simeon said to Mary, ‘This child is destined for the falling and the rising of many in Israel, and to be a sign that will be opposed so that the inner thoughts of many will be revealed—and a sword will pierce your own soul too.’ The final part of this always sticks in my mind. Jesus did come into the world to be it’s/our Saviour, but there was still to be pain and sorrow, however, now there is someone to share it with us.

With all God’s blessings…

It is envisaged that our church buildings will remain closed during February. However, we will continue to monitor the situation and we will open up once the local Covid-19 data suggests it’s safe to do so.
Revd Mike & the Wardens. 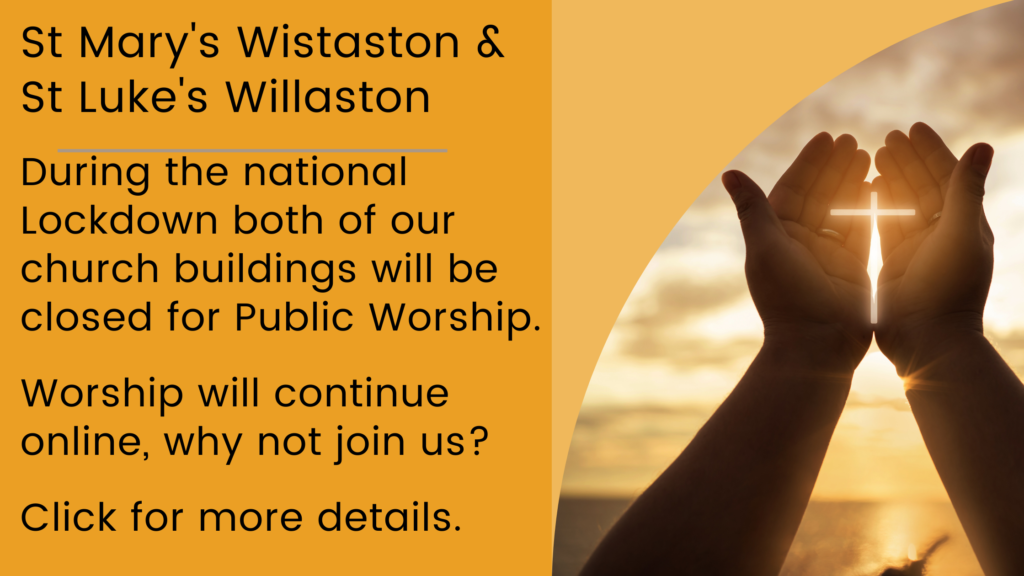 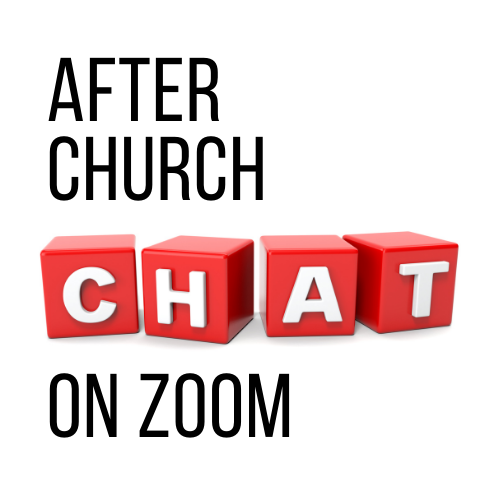 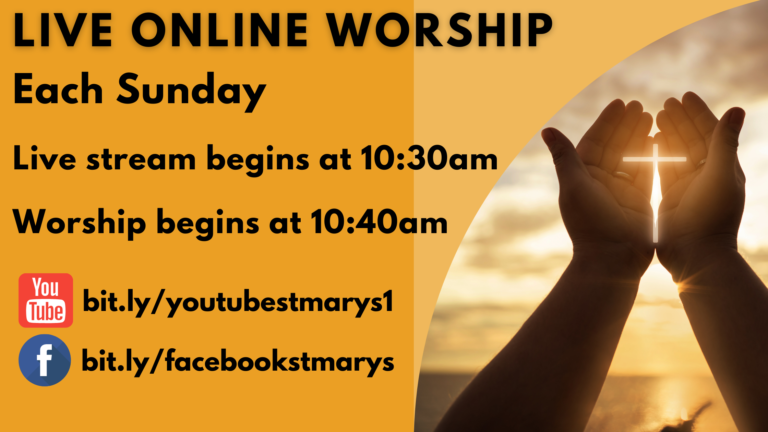 We now have the facility for people to phone in and listen to the Sunday service from St Mary’s which is ideal if you don’t have internet access. It’s done via Zoom, but it is accessed via a phone, landline or mobile. The number is a local rate number and would come out of any minutes you have or you would be charged at the current local rate. Here is how to access the service: 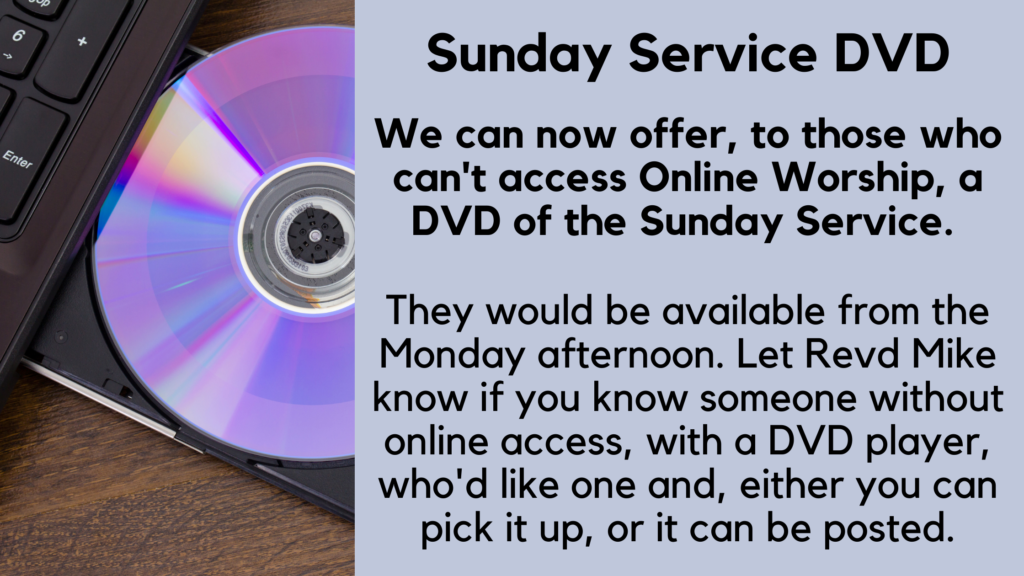 Articles are taken from Exciting Holiness which is available online for most saints days at: almanac.oremus.org 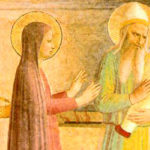 This day marks the completion of forty days since the birth of Jesus, when Mary and Joseph took the child to the Temple in Jerusalem. The requirement in Levitical law was for Mary to be ‘cleansed’, the completion of her purification following the birth of a male child. Until that day, she could touch no holy thing nor enter the sanctuary. Yet on seeing the holy family, Simeon praised God and acclaimed the infant as ‘the light to enlighten the nations’ and the prophet Anna gave thanks and proclaimed him her Redeemer. The image of Christ as the Light has led to the celebration of light countering darkness, with candles often taking a central place in the observance of this festival. 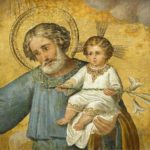 In the gospel of Matthew, Joseph is depicted as a good man, a working carpenter, who trusted in God. He received God’s messenger who shared with him God’s will for him and for Mary, to whom he was engaged to be married. Luke’s gospel describes how Joseph took the new-born child as if he were his own. He was with Mary when, on the fortieth day after the birth, Jesus was presented in the Temple, ‘where every first-born male is designated as holy to the Lord’. The adoption of Jesus by Joseph also established Jesus in the descent of David, to accord with the prophecy that Israel’s deliverer would be of the House and lineage of David.

The Annunciation of Our Lord to the Blessed Virgin Mary 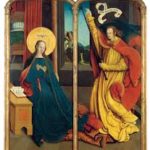 The story of the announcement of the coming of God made flesh in the person of his Son, Jesus the Christ, the Anointed One, is heard in today’s proclamation of the good news from the gospel of Luke. The feast marks the conception of Christ in the womb of Mary and has been celebrated in the Church since at least the late fourth century. The perfect humanity and the complete divinity of Jesus is affirmed, following the controversies around those orthodox assertions, which themselves led to the acknowledgement of Mary as Theotokos, God-bearer, which in the West became translated as Mother of God. The celebration thus took on strong associations with the person of Mary, and became known in England as Lady Day. In recent years, the Church has re-affirmed the day as a Feast of our Lord, on which his virgin-mother still has a unique place of honour. 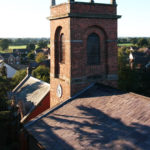 The heaviest six bells in the St Mary’s Church tower, on Church Lane in Wistaston, celebrate their centenary this year, as their dedication service took place on 19th February 1921.

Of these bells the two oldest were originally cast in the reign of Charles II, 1675. By an unknown founder, these bells would have been hung in the church that was on the present site, then transferred to the church building to the south of the present, and then back again to the present church in 1827. A further two bells were added in 1876, cast by J Warner of London. These four bells were mounted on a wooden frame. Around 1900 it is believed that two of the bells were cracked and the wooden frame unserviceable. It was decided to make an appeal to recast all four bells and add a treble and tenor to form a ring of six bells. This work was carried out by Gillett and Johnston of Croydon and the new peal hung in a steel and cast iron frame.

FR Morton, Tower Captain, said: “Although a celebration will not be possible this year due to the present situation, it is hoped to hold a 350th celebration for the original casting of the two oldest bells in 2025.” 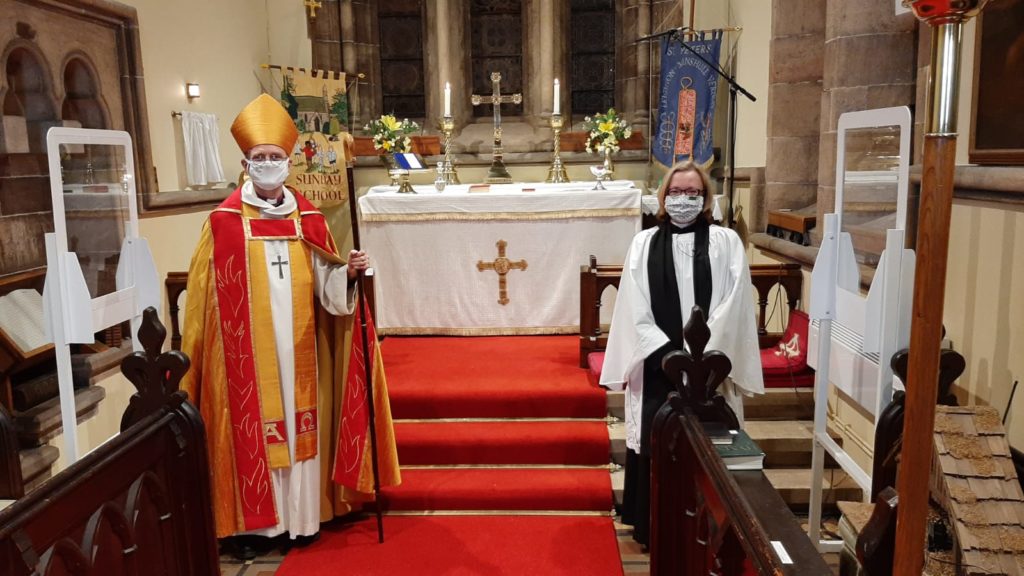 On Tuesday 26 January Revd Catherine Cleghorn was licensed and installed by the Bishop of Chester as the incumbent of St Peter’s, Leighton and St Leonard’s, Warmingham. Catherine was formerly the curate of St Andrew’s, St Peter’s & All Saints Crewe. Our prayers and best wishes are with her as she takes up this new post

The Diocese of Chester has been given permission to appoint two new bishops.

Hundreds of people responded to the diocesan survey seeking views and comments about the two bishop posts.

Bishop Mark says: “Thank you to everyone that took the time to share their views on the future Bishops of Stockport and Birkenhead. I was overwhelmed by the breadth and wisdom of the feedback. These give a good indication of the individual qualities we hope the future bishops will bring to the roles and also a reminder of the deep faith and warm enthusiasm we have in this diocese for all that God has for us and the communities we serve. Please continue to pray.”

The word cloud image illustrates the sentiment expressed by those who completed the survey. 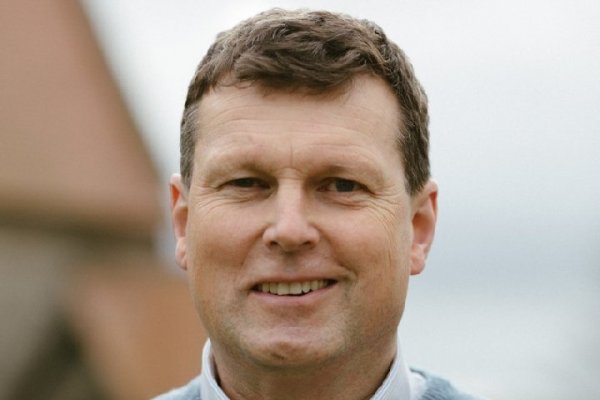 The Revd Peter Froggatt has begun his new role as Director of Outreach. Peter leads the new department of Outreach which incorporates the work of the previous departments of Mission and Social Responsibility. More here. 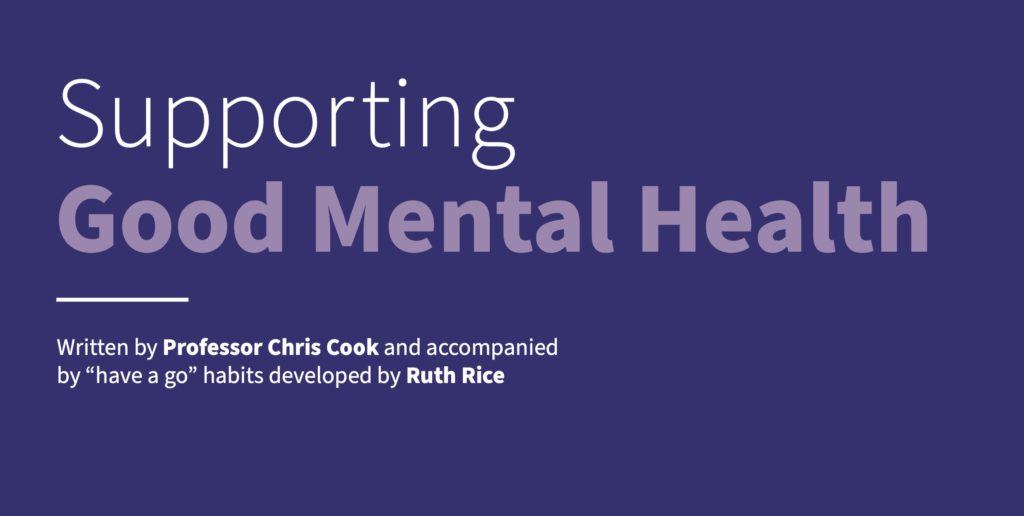 Daily Hope, a free national telephone line, offers music, prayers and reflections as well as full worship services from the Church of England at the end of the phone. 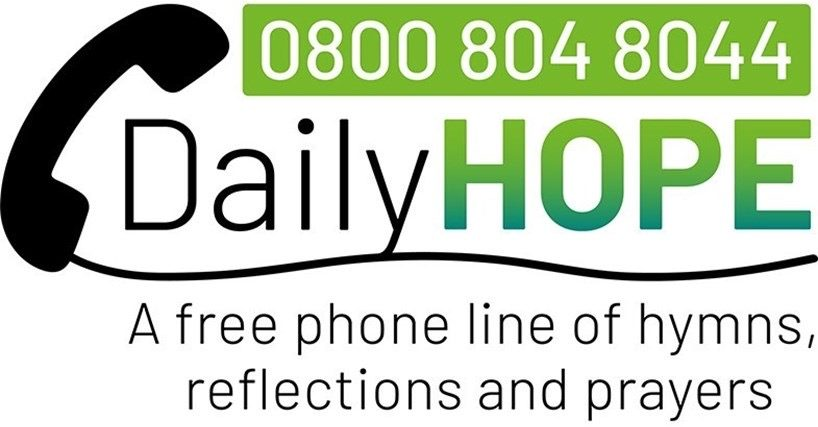 You can view the latest Chester Diocesan News using the Magazine Menu above.

From St Paul’s Pantry (Crewe Foodbank)
Here’s our monthly Foodbank data for December that you may wish to share with your congregations:-

If you are able to donate, we are currently running low on long life milk, sugar, tinned meat pies, and rice pudding. We are open Monday to Friday between 9.30am and 3.30pm for donations at our rear entrance.

Thank you for your ongoing support. Best Wishes,  John Rivers

Take out a new home insurance policy with Ecclesiastical (our church’s insurers) and they will give our church £130. https://www.ecclesiastical.com/individuals/home-insurance/trust130/ 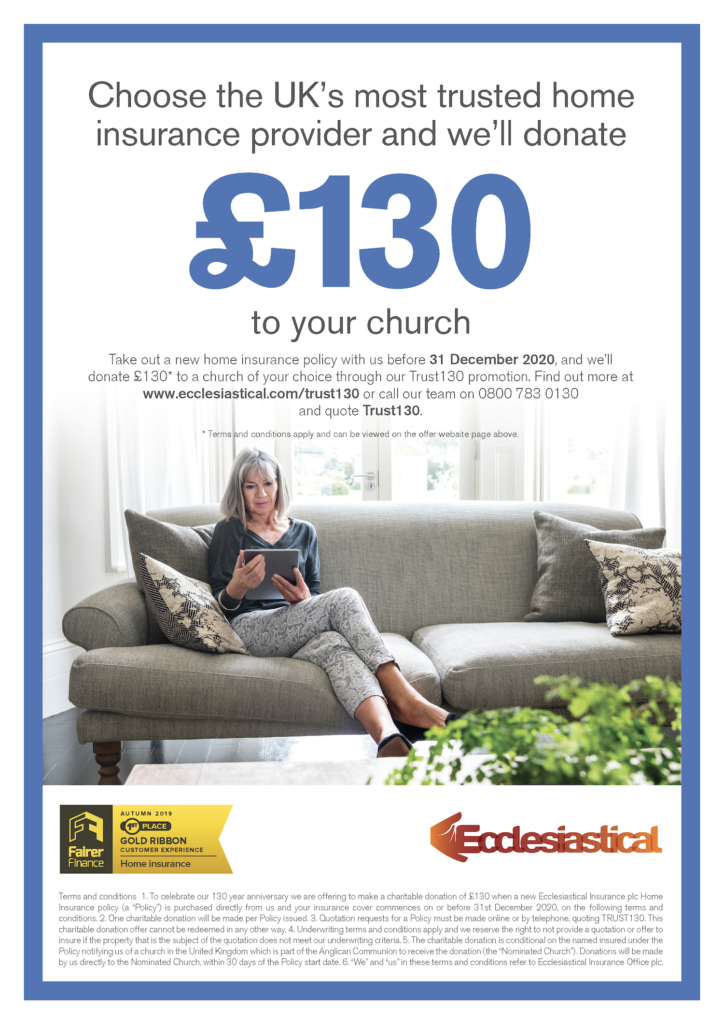 We’re are registered with easyfundraising, which means you can help us for FREE. Over 4,000 shops and sites will donate to us when you use easyfundraising to shop with them – at no extra cost to yourself! All you need to do is sign up and remember to use easyfundraising whenever you shop online. It’s easy and completely FREE! These donations really mount up, so please sign up to support us at https://www.easyfundraising.org.uk/causes/stmaryswistastonpcc/?invite=2QY49G&referral-campaign=s2s

Giving to our church Online or by Phone Banking

It’s simpler than you may think

Online One off giving

You can give via our very simple online giving partnership with Give a Little and Sum Up. Simply click the button below. Sum Up take a small transaction fee from what you give.

Giving via your bank

You can give via your bank via online banking or telephone banking. If you do it this way we receive 100% of the money you give, there is no transaction fee. Here are the details you need to make a payment directly into the church bank account. For phone banking you may need to take a look at a statement from your bank and it normally has the details of how to do this on the back. You can give once or set up a monthly payment. Please remember to never give passwords over the phone and only call the official number on your statement.

Do you want to keep in touch with the latest news from us?Then join our Email Newsletter ListClick the email icon to join via our website

From the Church Registers – January 2021

If you have an article for a future edition of this online magazine please click to Submit an Item or email the editor at magazine@stmaryswistaston.blog